No cure for the water child

As a water child that grew up on the sea, Thomas Kettler-Semmler is a dedicated ship and functional model builder and, thus, stepped into his father’s shoes. With the help of his CNC machine he is able to realize amazing projects.

“I came to model building as so many of us do: My father set the roots and I followed him,” remembers Thomas Kettler-Semmler. At the age of nine he classically started with the construction of Matchbox and Revell tanks before attempting airplanes and cars. But it was not long before his father’s passion for ship model building rubbed off on him and he constructed his first model when he was about 14 years old.

Soon, time and space became a rarity and he let his hobby rest for a long time until he rediscovered it in 2000. “Model building is like an illness without a cure,” he ascertained and, thus, he got into touch, via Slot Racing, with model cars in scale 1:24 and started modifying available construction kits. Because the cars which suited him especially were mostly not available for Carrera, he began to turn toward new and modern technologies. This way, he created the Mercedes racing transporter and the G-Mercedes, which are being distributed as construction kits up to today, using the computer drawing and the photo etching technique. When soon afterwards more and more milled chassis came onto the market Thomas Kettler-Semmler got interested in the CNC technique. Because the investment of about 6000 € was too high for one hobbyist alone, he bought his first machine together with three other model builders.

With ship model building in his genes it was only a matter of time until this passion would come through. In 2011, he wanted to go “back to the roots” as he puts it. For model builders the CNC technique bears the great advantage of being able to construct exactly in scale. “If you need ten similar ribs this is manually hardly possible,” explains Thomas Kettler-Semmler and continues: “I am a rivet counter who wants to produce everything exactly in scale.” Unfortunately, there was always a long waiting line for the CNC machine purchased together which is why the wish for an own but affordable system arouse in him. When he was visiting the Intermodellbau in Dortmund in 2013 for the first time since his youth he noticed the bright orange of STEPCRAFT out of the corner of his eye just when he was about to leave the fair. The model builder went to the stand in order to obtain more information and remembers “the prices being highly interesting.” After one night time for consideration he went back to the fair the next day to leave it with a STEPCRAFT D.420. “The assembly was easy and it runs smoothly ever since. Whenever I had a problem, I always received help fastly. This suited me a lot,” says Thomas Kettler-Semmler and continues: “From the beginning on, the machine did exactly as it should: It milled wood and plastics and also aluminum or brass once in a while.”

The procedure with his projects is always the same: If there exists no plan, the first step is the modeling of the solid body in the boat building software Delftship. From this he derives the CAD data out of which he creates a .dxf-exchange file which he uploads afterwards into the CAM software ESTLCAM. Here he defines toolpaths and outputs a G-code file which he imports into the control software of the machine. “Of course you need to understand the basic steps in the CAM, CAD and CNC technology but these are all learnable and no rocket science,” states the model builder. It did not take long until the ribs for the ship models became too big and could not be produced on DIN A3 anymore. This is why Thomas Kettler-Semmler was a proud owner of STEPCRAFT D.420 only half a year later. Together with another model building colleague the idea of creating a Boom Boat came up, which is used as an auxiliary boat for wood cutting works in Canada. The friends bought the appropriate hulk on the Intermodellbau and only wanted to create the deck by themselves. But soon it became apparent that it was completely unsymmetrical which is why the friends decided to design and construct the “motorized bathtub,” as Thomas Kettler-Semmler calls the ship lovingly, completely on their own and distribute it afterwards. The Boom Boat was then milled entirely out of GFK and put onto four building boards. Up to today it is available at a southern German distributor. “Thus, we are generating a small additional income for new projects,” says the model builder. 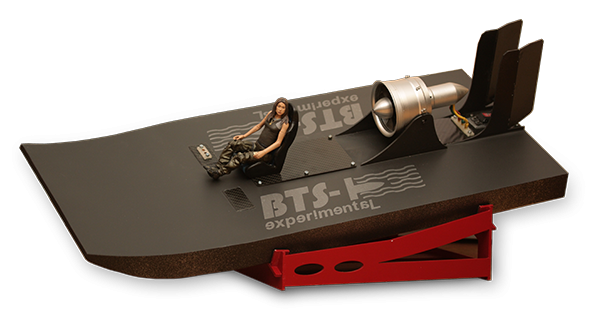 Fascinated by the possibilities of the CNC technique, both of them wanted to produce the next ship completely with the STEPCRAFT CNC System. They decided on building an airboat and started to draw the honeycomb before milling the hulk and frame parts as well as the engine mounts. During the construction process the model builders take a great pleasure in the functionality of the system. “I only have one machine and, thus, need only once the space. The rest consists out of accessories,” explains Thomas Kettler-Semmler. This way, they could produce construction parts, such as plug connections for battery connections, using the 3D Printing Head, and manufacture labels out of vinyl with the help of the Drag Knife.

For about a year now, Thomas Kettler-Semmler has been working with his STEPCRAFT D.840 on a yacht that has been introduced by boatsbuilder Sea Ray in 2014. Up to today he was able to finish the rib frame and sums up that “CNC is worth gold for everybody who constructs on his own.” For him, it facilitates the execution and repeatability which is of great importance to him because he plans again to distribute the yacht as a construction kit later. “For sure, someone will come and ask me later if he can have the ribs or some other parts,” explains the model builder. Again, this will generate a small additional income that can be invested in future projects.

We use cookies on our website. Some of them are essential for the operation of the site, while others help us to improve this site and the user experience (tracking cookies). You can decide for yourself whether you want to allow cookies or not. Please note that if you reject them, you may not be able to use all the functionalities of the site.